Cinco de Mayo, ( Spanish: “Fifth of May”) , also known as the Anniversary of the Battle of Puebla,  national holiday in Mexico in honour of a military victory in 1862 over the French forces of Napoleon III. When in 1861 Mexico declared a temporary moratorium on the repayment of foreign debts, English, Spanish, and French troops invaded the country. By April 1862 the English and Spanish had withdrawn, but the French, with the support of wealthy landowners, remained in an attempt to establish a monarchy under Maximilian of Austria and to curb U.S. power in North America. On May 5, 1862, a poorly equipped mestizo and Zapotec force under the command of General Ignacio Zaragoza defeated French troops at the Battle of Puebla, southeast of Mexico City; about 1,000 French troops were killed. Although the fighting continued and the French were not driven out for another five years, the victory at Puebla became a symbol of Mexican resistance to foreign domination. The city, which was later renamed Puebla de Zaragoza, is the site of a museum devoted to the battle, and the battlefield itself is maintained as a park.(britannica.com) 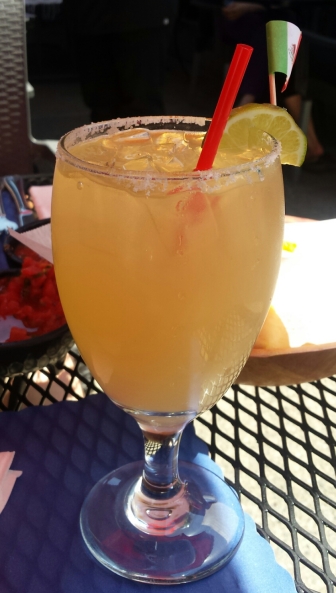 Its’ Cinco De Mayo Mi Amigos and I am happy to celebrate with my Mexican brothers and sisters to do cheers in celebration on this great day!

What better way to celebrate than some delicious Mexican cuisine with an ice cold margarita. Nothing to it but to do it!

During this day every year, I make sure to stop by  the nearest Mexican restaurant and indulge in some Mexican heritage cuisine. I won’t be caught dead eating anything other types of food to make sure I take part in the celebration.

None the less, Mexican food is fantastic any day you choose it! So I am glad to oblige!

A great place to go for Mexican food is this relaxing indoor and outdoor restaurant in the heart of downtown Mountain View, Ca called Case Lupe!

My fiance and I went there this past weekend during an art festival in Mountain View on Castro St. and decided to sit outside and enjoy the sun and have a nice Margarita while the patrons walked past. They have tables already set up outside which leaves a great place to dine on a nice sunny day!

I started out with a Cadillac Margarita to wet my palate while I salivated over the view of other dishes others were eating on their plates. It cooled me off in the hot California day while brightening my smile as the liquor consumed me.

I decided to order the Chicken Tostada meal after seeing someone with this beautiful artwork next to me and let me tell you it was worth every bite. It also included Spanish rice and beans as well.

The colors and portrayal of the tostada, beans and rice were elegant and each bite was tasty, flavorful and gave me satisfaction galore!

Let me also mention that the Cadillac Margarita was not watered down and had me feeling pretty darn good when I left. They make a great Margarita! Highly recommended! True live action eating! Good job Casa Lupe!

I hope all of you are planning to celebrate with Margaritas and some delicious Mexican cuisine tonight! If not, then Keep Hope Alive and keep pushing forward in your life!

Thanks for joining me on today’s adventure! I look forward to seeing you on the next run!

The Editors of Encyclopædia Britannica (2015) Anniversary of the Battle of Puebla Retrieved from http://www.britannica.com/EBchecked/topic/118001/Cinco-de-Mayo