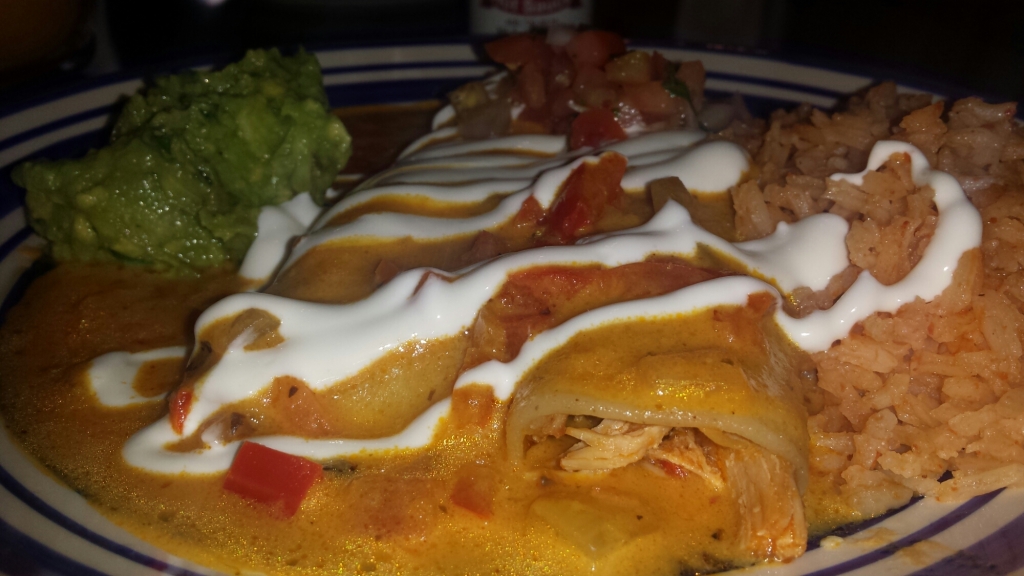 There is much evidence to suggest that enchiladas come from the Mayans. The dish was first associated with the region of Mexico by the Yucatan in pre-Columbian days. Corn tortillas were a staple of the Mayan people and there is evidence that the first enchiladas were tortillas that had fish rolled in it. The enchilada is similar to papadzules a traditional Mayan dish, which also comes from the Yucatan region. In this dish, corn tortillas are dipped in pumpkinseed and rolled around chopped boiled egg. It is then smothered in tomato sauce. This dish was primarily food for the nobles and was said to be served for special occasions.

When the Spanish Conquistadors made their way to the Western Hemisphere they documented the variety of foods the indigenous people ate. Tortillas, made from flattened corn bread were originally called tlaxcalli, however it was the Spanish conquistadors that named it the tortilla. Throughout the later centuries, the Mexican people continued to enjoy this dish and the enchilada can be found in a wide variety of cook books dating all the way back to the first Mexican cook book published in 1831 called El Cocinero Mexicano.(historyofthings.com)

Tacos, Enchiladas, Chicken is their best!

So it’s Tuesday and I have survived the Monday’s and need an energy spark to get me through the rest of the week.

Something with a punch!

The light bulb illuminates and time to go..

To the land where creamy sauce and cheese overflows…

Time for a visit to Speedy’s Tacos..

So I talked to you before about Speedy’s regarding there delicious tacos before so read it here when you can.

The tacos are out of this world and the chicken  is the masterpiece meat of them all. Something about their chicken is just mouth watering..

It melts in your mouth, it is shredded perfectly and so soft that you can grind it into nothing just by rubbing it between your fingers.

Today, I wanted to take a dive into one of their daily specials which was chicken enchiladas with chipotle cream sauce.

Let me just say that I am so glad I began to experience something outside of just their tacos because this enchilada dish was fantastic!

The sauce enhanced every bite of the corn tortilla wrapped in heavenly goodness with that exotic shredded chicken. Not too spicy, not too sweet but a taste you would desire in your dreams.

Combine that bite with their Spanish rice; which I must say was soft,flavorful and delectable with every bite and it was  completely outstanding!

Bite after bite and moan after moan I attacked this thing until it was physically demolished! Nothing to it but to do it! True live action eating! Good job once again Speedy’s!