Did you know…. The town of Santa Monica was launched by two entrepreneurs: Colonel Robert S. Baker, who made a fortune in mining equipment before taking up cattle and sheep … END_OF_DOCUMENT_TOKEN_TO_BE_REPLACED

Did you know…. The town of Geyserville retains the ambiance of a bygone era. Located in the beautiful Alexander Valley, the town owes its name and beginnings to the discovery … END_OF_DOCUMENT_TOKEN_TO_BE_REPLACED

Did you know…. San Diego’s coastal seat makes it an ideal destination for adventurers and sun seekers. Whether you’re hiking along the sandstone cliffs of Torrey Pines State Reserve, walking through … END_OF_DOCUMENT_TOKEN_TO_BE_REPLACED

Did you know…. Our modern steakhouse has two direct ancestors, the beefsteak banquet and the chophouse. Both arose, interestingly enough, in mid-19th century New York City, a town that got … END_OF_DOCUMENT_TOKEN_TO_BE_REPLACED

Did you know…. The roots of Rutherford—the historic grape growing center of the Napa Valley—actually stretch south of its central location in Napa Valley to Yountville, where George Yount settled … END_OF_DOCUMENT_TOKEN_TO_BE_REPLACED

Live Action Quick Tips Did you know…. Modern Wagyu cattle are the result of crossing of the native cattle in Japan with imported breeds.  Crossing began in 1868 after the … END_OF_DOCUMENT_TOKEN_TO_BE_REPLACED 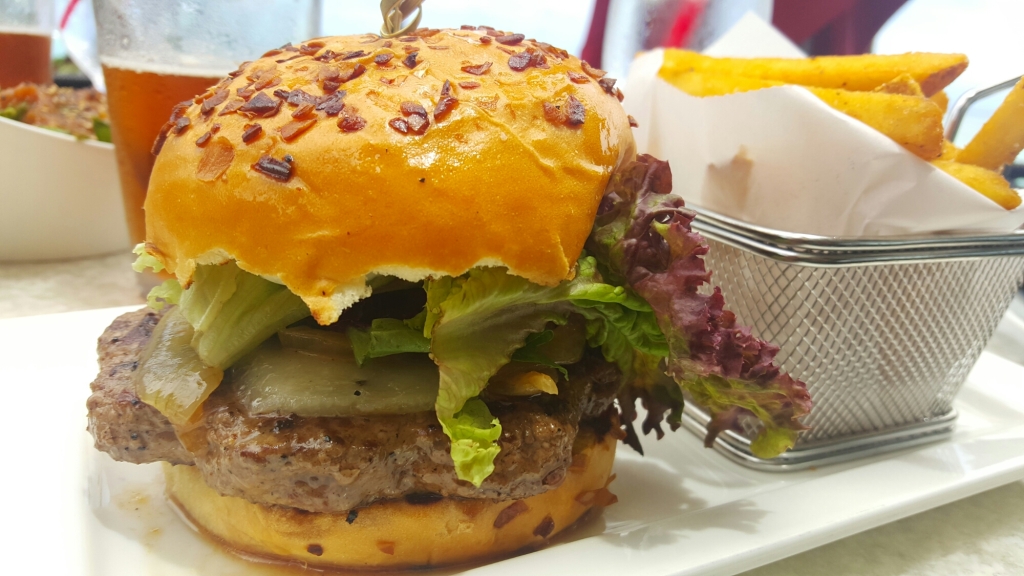 There is something about the nature of truffles that have captivated people for over a thousand years. Perhaps it is the dazzling, irresistible aroma that continues to draw generation after generation to this delicacy. The history of these black pearls of the Earth is often filled with mystery, superstition and, at one time, damnation.

This subterranean mushroom is found within the living roots of chestnut, oak, hazel, and beech trees. The word truffle comes from the Latin word “tuber”, which means outgrowth. It dates back to as early as the ancient Egyptians, who held truffles in high esteem and ate them coated in goose fat. A myth surrounded this gourmet entrée when people believed they came from the ground after lightning struck the earth. According to a legend, a farmer spotted his pig digging at the root of a tree, eating the mushrooms that it found. Upon seeing that the pig remained healthy, the farmer tried the mushrooms himself. Afterwards, his inability to have a child with his wife resulted in them having thirteen children. Many soon felt that there was a supernatural quality to truffles, and saw them as God’s gift to humanity. The Greeks and Romans used them for therapeutic purposes, feeling that they gave eternal health to the body and soul. Truffles were also seen has having exotic qualities in its aroma and flavor, making it more popular among the noble classes.(gourmetfoodstore.com) 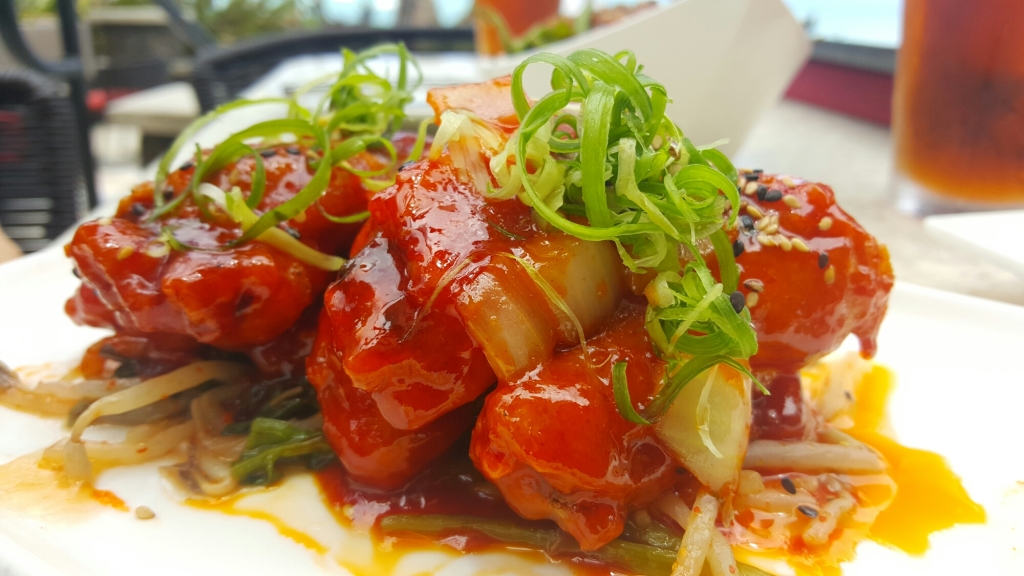 Have you ever tasted something so good that you wanted to cry?

I assure you that, the ambiance, the view of the beautiful Pacific Ocean, and the exotic delicious flavors of the food at this new found paradise was all the way superb.

Time to dive into one of my favorite places on Earth; Rumfire on the glorious beach of Hawaiian waters!

END_OF_DOCUMENT_TOKEN_TO_BE_REPLACED

The earliest American chicken and waffle combination appears in Pennsylvania Dutch country during the 1600’s, when home cooks made waffles and topped them with pulled chicken and gravy. A different, decidedly soul food-inspired approach to the pairing worked its way into popular culture much later with the opening of Wells Supper Club in Harlem, New York. The restaurant, known simply as “Wells” to regulars, opened in 1938. Wells became a late night hotspot for jazz musicians, who would stop by late at night after their various gigs. The musicians, arriving too late for dinner but too early for breakfast, enjoyed the appetizing compromise of fried chicken and waffles. Before long, Wells was frequented by the likes of Sammy Davis Jr. and Nat King Cole (who held his wedding reception there).

Wells managed to inspire a nationwide trend. In 1976, a Harlem native named Herb Hudson opened a Los Angeles restaurant dedicated exclusively to the pairing: Roscoe’s House of Chicken and Waffles. Hudson’s Motown connections helped to launch the restaurant, making it a popular destination for music industry professionals and performers in the Los Angeles area. Over the years, the restaurant has become an established part of the Hollywood food landscape. Roscoe’s is so well known, in fact, that President Obama took time out of his busy schedule in 2011 to make an unscheduled stop there. In case you’re curious, he ordered the “Country Boy,” Number 9– three wings with choice of waffle, potato salad or French fries. Here’s hoping he chose the waffle.

Gladys Knight, a patron of the original Wells, started her own chain with gospel singer Ron Winan in 1996—Gladys and Ron’s Chicken and Waffles. Other soul food restaurants feature chicken and waffles on the menu, including Lo-Lo’s in Arizona and Lucky J’s in Texas. Thomas Keller’s famed restaurant Ad Hoc in Napa has been known, on occasion, to serve lemony fried chicken with crispy and delicate waffles. And in Harlem, Melba’s Restaurant serves up eggnog waffles with strawberry butter and buttermilk fried chicken. While it may sound strange, Melba’s combination is so tasty that she beat out celebrity chef Bobby Flay in a chicken and waffles “Throwdown” on Food Network.(pbs.org)

Chicken & Waffles of Course!! and the sides of your liking..

There is is a new American staple that has hit the taste waves and it’s not your normal breakfast.

We’ve heard of the Grand Slam Breakfast with pancakes, eggs and your choice of bacon,sausage or ham.

We’ve heard of Waffles and your choice of bacon, sausage or ham.

How about something different added to the waffle?

Time to invite someone else to the table..

That’s fried chicken for breakfast paired up with a glistening golden crisp waffle.

No place pairs them up better than Roscoe’s Chicken and Waffles!

END_OF_DOCUMENT_TOKEN_TO_BE_REPLACED

Shrimp, crab, and crawfish boils are a Louisiana Cajun tradition and can be found across Louisiana and can even now be found along the Gulf South. But it is the more popular crawfish boil that is most closely associated with Louisiana. The Breaux Bridge Crawfish Festival in Louisiana has been named one of the top 10 food events by USA Today[3] and is a showcase for Cajun music and culture. Major crawfish boils are held by churches and other organizations as fundraisers throughout the spring. Tulane University holds an annual “Crawfest” in April, and the University of New Orleans holds an annual crawfish boil for all students at the end of the spring semester (Students unwinding on Crawfish and Unprecedented Fun—SUCAUF). Smaller events can be found in backyards and parks throughout April, May, and June. Locals traditionally eat crawfish, as well as crabs, without tools such as shell crackers or picks.(en.wikipedia.org)

We flock for seafood boils as well.

A seafood boil would be considered a get together where you boil potatoes, sausage, corn on the cob, some great seasonings and most of the time shrimp, crawdads or crab.

I won’t be boiling myself today, but dining at a restaurant that does.

END_OF_DOCUMENT_TOKEN_TO_BE_REPLACED

Escaping the incoming Communist regime at the end of the Vietnam War, many Vietnamese fled to America in the mid-1970s, and quite a large number settled in Louisiana. Recent figures put the New Orleans Vietnamese population at 14,000, making our city host to the largest, most vibrant Vietnamese community in the state.

Why New Orleans of all places? For one, the sub-tropical climate and proximity to water appealed many Vietnamese immigrants. Also, many newcomers after the Vietman War were Catholic, and both New Orleans and national Catholic charities were spearheading efforts to help new residents find jobs and housing in the city.

Many Vietnamese settled in the newer, suburban parts of the city, particularly in New Orleans East but also in parts of Algiers, Avondale, and other places on the West Bank. As their local population grew, the Vietnamese community spread to other neighborhoods and began to revitalize these areas.(neworleansonline.com)

Something about seafood just gets me all riled up..

To sucking life out of a crawdad..

To sinking your teeth into some succulent plump shrimp…

Whatever your fancy, you haven’t had nothing yet until you try your seafood Cajun style.